The contest doesn’t require any special skills of a professional presenter, so it can be used in any company. Frankly, this is one of my favorite types of contests.

An audio fairy tale is part of the holiday script, the full version of which can be found here.

This is my original script, created specifically for the company with which we will celebrate this New Year in the Santa Claus style. We will be 9 people (7 adults + 2 children).

In the US and Europe, Santa's Reindeer are extremely popular, children and adults know not only the names of Santa's assistants, but also a detailed biography and personality of each. This fairy tale takes it into account, i.e. the script recreates a situation in which Deer might behave like this.

I plan to make an introductory speech about deer, in order to give the information about the role. Then I give to everyone a piece of paper with "a few words" about the deer. Sitting at the table, we will read each role one by one. After that, we go out on an improvised theatre stage and perform our modern Christmas tale. What to do exactly? The Record will tell us! We will try to make and upload a video version to our channel.

Equipment for the Contest:

I bought the Antlers on Aliexpress:

How to Cast Parts in the Christmas tale? (scene)?

What are the Names of Santa's reindeer?

This should be printed before performance, in order to acquaint everyone with the role. There are 9 roles.

Donder has an extensive experience, which allowed him to become a special-training-deer instructor. Donder is responsible for keeping crew in excellent shape and observing their diet. Donder recruits reservists every year in November. They must replace the members of the main crew in emergency.

Always busy. In his spare time Dasher cleans the sleigh. He was born at the North Pole and always loved to compete with other deer in speed. Dasher's competitive thirst is disapproved by his colleagues.

Dancer, as is clear from the name, is fond of dancing. He was also born at the North Pole and devotes all his free time to practicing dance steps. Dancer could make a career, but prefers to remain a member of "Santa's Christmas crew." Deer splashes his passion for dancing giving concerts to elves, who work in the workshops of Santa Claus.

The chief guardian of the cleanliness in the crew. As expected the girl, the doe thoroughly cares her appearance, and the appearance of her mates. This cause them many unpleasant minutes - she subjects them to washing and combing. Vixen has a romantic heart, she is in love with a fellow crewmember — Cupid. Santa Claus pretends not to notice the «office romance»; at least, sanctions are not imposed on happy lovers.

The name says it all. He is mutually in love with Vixen. This is not surprising, because Cupid was born on Valentine's Day. Cupid tries to arrange other deers' personal life. He even publishes a Dating newspaper at the North Pole.

Rudolph became the ninth in the already consolidated team. Santa decided to include him in the crew because of Rudolph’s unusual nose. It is difficult to stay on right course in condition of thick fog or blizzard, but Rudolph's bright red nose helps with it.

The main merry fellow in Santa's crew. Prancer adores hide and seek. He is matchless master of the game. Prancer is responsible for the leisure of the Christmas reindeer. He chooses movies to watch together, cooks popcorn and hot chocolate.

This is the name of the deer, who was born when a comet Blorius was flying across the sky. Comet — one of the youngest deer in the "Christmas crew". Nowadays he continues to learn the basics, but he dreams, that one day he will be teaching others.

Blitzen is an ardent footballer and plays in the Santa's team. After the match, he is often dirty. Therefore, Vixen has to wash him more often than others and Blitzen is not happy with it. On the other hand, Blitzen is indispensable in extreme flying conditions - it is he who leads the crew if it gets into a snowstorm 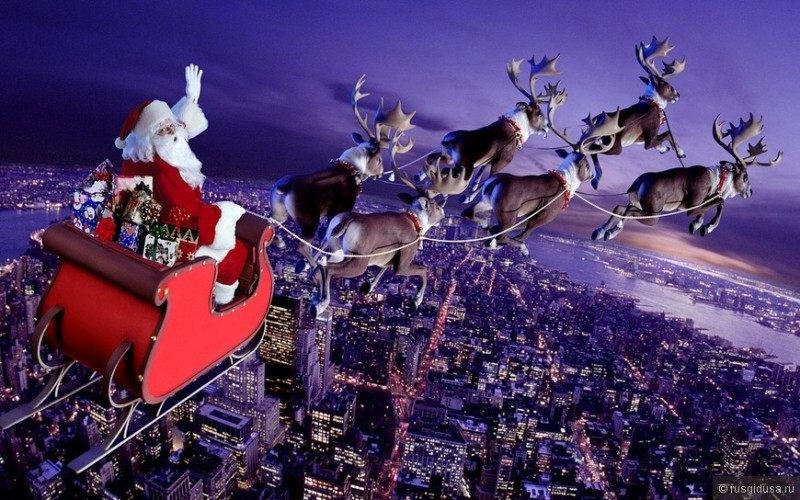 Join our VK group or Instagram Recently there was a premiere of a cartoon about Elliot (the smallest deer), so maybe soon there will be 10 deer.
Follow our Youtube channel and you will not miss the video version of the tale and much more!